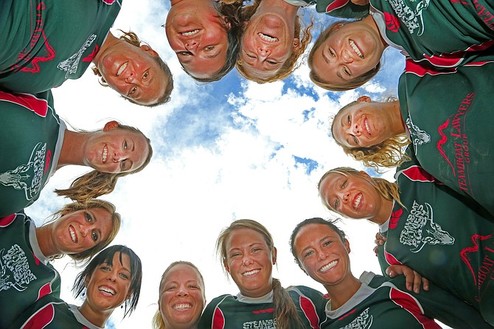 Photo Credit: Austin Colbert
In the summer of 2012 four local girls joined together with the motivation to start a women’s rugby team in Steamboat Springs. The town has a strong rugby background as the men’s “Cowpie” rugby club has over a 40 year heritage! The Cowpie term was coined for our annual tournament held here in Steamboat Springs because it used to take place in the rodeo grounds, literally amongst the cow patties! Now, with the availability of more field space and growth of the sport in this town, we host this annual tournament at the Ski Town fields every summer in the second weekend of July!

​Two of the founders of the women’s rugby team had previously played the sport in college, and decided to continue their careers and share their passion for this sport in this town that we all adore and call home! With an established practice pitch and the open arms from the Men’s Rugby club, we had the tools and support to build a foundation for growth. Each year more girls started to show up to practice and Steamboat’s rugby culture overall has since been ever evolving and growing.


Now, here in 2016, we are entering our 5th season and have never been stronger! With an established team base of 9 returning veteran players, many of which have been with the team since year one, we are gaining a lot of recognition in the ski town rugby world with quite the competitive edge. We are the founders and first Ski Town women’s team in the state! Our focus has, and always will be, on Union style 15’s rugby. With the lack of other summer women’s teams in the ski town communities surrounding us, we are currently a tournament focused, ten’s team. But our vision for the future is to encourage the development for other clubs similar to ours and develop a summer women’s Mountain League that will include singe 15’s games. Rugby is the largest growing sport in America and your participation on our team is fundamental to the overall growth of the sport. We are home to some amazing rugby resources and people. Both Coach o and Coach Tina have impressive rugby resumes, USA rugby is headquartered in Boulder, CO and the Denver Pro Rugby team is a strong competition in the new North America’s Pro League. This is a great place to build a solid rugby career if you are interested in seeking growth and opportunity you are staring in the right place. Thank you for your participation on our team and keeping the tradition going strong. We look forward to an exciting and fun summer with you.

-Cheers,
The Steamboat Women’s Rugby Club Board
Powered by